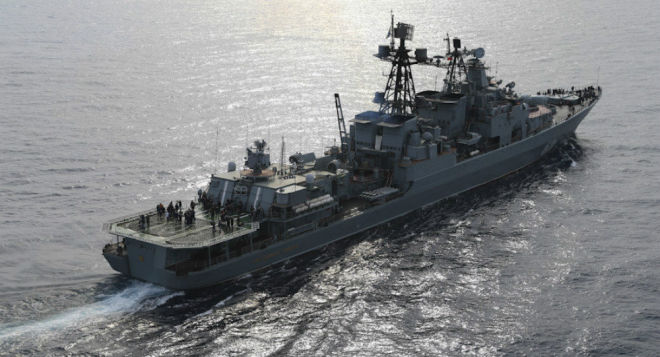 The Russian Northern Fleet’s anti-submarine ship The Vice-Admiral Kulakov has extended assistance to a Ukrainian fishing boat in the Mediterranean, the Russian Defense Ministry said.

"The Vice-Admiral Kulakov received a mayday call from a Ukrainian shipping boat, 097 with a crew of seven on board. Two of them needed medical assistance".

As follows from the news release, the Russian ship picked up the distress message at 08:20 Moscow time to instantly hurry to the rescue.

"At 09:45 the Russian ship approached the Ukrainian fishing boat and took measures to provide assistance required. A group of Russian sailors and medics boarded the Ukrainian boat in distress. The affected sailors are receiving first aid," the news release runs.

At the moment the Russian naval sailors are looking into whether the crew of the Ukrainian ship should be evacuated. Also, they are making a decision if the boat is reparable or will have to be tugged to the nearest seaport.

The Ukrainian fishing boat has been adrift for the past two days. A four-point storm on the sea and strong gales complicated the rescue operation.