Shi'ite fighters to coordinate after sealing off Mosul 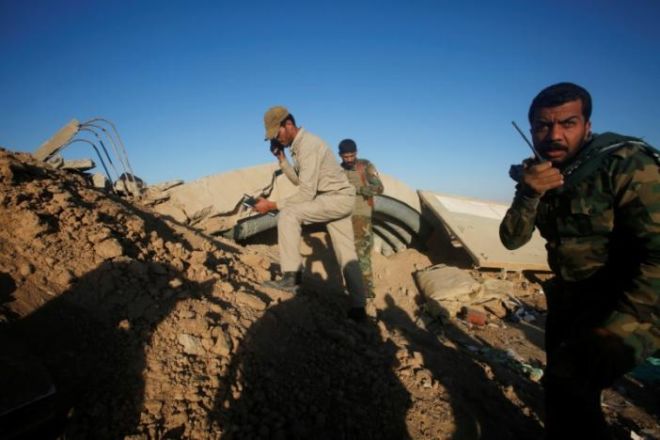 Iraqi Kurdish and Shi'ite forces agreed to coordinate movements after cutting off Mosul from the rest of the territory held by Islamic State in western Iraq and Syria in support of a U.S-backed offensive to capture the city, U.S. and Iraqi officials said on Thursday.

The agreement was reached at meeting on Wednesday between commanders of Kurdish Peshmerga forces deployed in Sinjar, west of Mosul, and Hadi al-Amiri, the leader of the Iranian-backed Badr Organisation, the biggest component of the mostly Shi'ite paramilitary coalition known as Popular Mobilisation.

Mosul was already ringed to the north, south and east by Iraqi government forces and the Peshmerga. Iraq's U.S.-trained Counter Terrorism Service unit breached Islamic State defenses in east Mosul at the end of October and is fighting to expand its foothold there.

The offensive started on Oct. 17 with air and ground support from a U.S.-led coalition. It is turning into the most complex campaign in Iraq since the 2003 invasion that toppled Saddam Hussein, a Sunni, and empowered the nation's Shi'ite majority.

Al-Amiri "came in order to coordinate with us," said Mahma Xelil, the mayor of Sinjar, a city where Islamic State committed its worst atrocities after taking over the region two years ago, killing and enslaving thousands from the Yazidi minority.

Controlling the road will make it easier for the Iraqi army to enter Tal Afar, Xelil said. "There must be cooperation between us to prevent ISIS from moving their equipment and their fighters," he added, referring to Islamic State.

Sinjar was recaptured a year ago by the Peshmerga, forces of the Kurdistan Regional Government of northern Iraq. It lies west of Tal Afar, another stronghold of Islamic State, 60 km (40 miles) west of Mosul.

"The joining of these forces greatly reduces the freedom of movement of ISIL insurgents in and out of Mosul," said Air Force Col. John Dorrian, a Baghdad-based spokesman for the U.S.-led coalition, referring to Islamic State. "They have already lost the effective ability to move in large numbers, but now this has been made more difficult for them."

Another prominent leader of the Popular Mobilisation units, Abu Mahdi al-Mohandes, said on Wednesday the Shi'ite forces had linked up with the Peshmerga near Sinjar, completing the encirclement of a region that extends from Mosul and Tal Afar.

Mohandes said Popular Mobilisation would try next to separate Mosul from Tal Afar, which lies on the route between Mosul and Raqqa, the main city of the militant group's self-styled "caliphate" in Syria.