US election: Who is going to win? 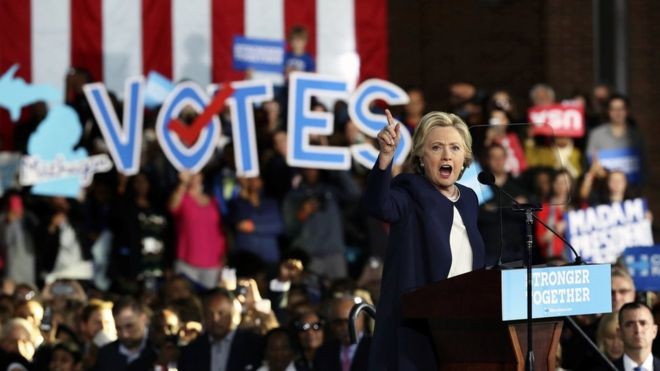 There are three days to go, so what is the state of the race now?

After a precipitous drop in the national polls in the days leading up to and after the James Comey FBI bombshell last week, Hillary Clinton's national poll lead appears to have stabilised in the low single digits (disregarding that quirky LA Times survey that has always leaned Trump).

A look at key state polling, however, shows signs of weakness in the vaunted Clinton firewall.

New Hampshire, one of the states that had proven to be durably blue over the past few months, now appears to be a toss-up.

Both Mrs Clinton and President Barack Obama are planning last-minute trips there to shore up support. And Michigan, which was a 10-point win for Mr Obama in 2012, is also looking uncomfortably close for the Democrats.

If Donald Trump manages to break the Democratic lock on one of those states, Mrs Clinton will have to prevail in one or more of the toss-ups on the map. Fortunately for her, there is some good news to be found in early voting results.

In Florida, votes are pouring in from Miami-Dade county, and the Clinton campaign is boasting that many are from Hispanics thought unlikely to turn out (and therefore don't show up on likely voter surveys).

The last day of early voting in Nevada also led to strong results in solidly blue areas around Las Vegas, as one polling place in a Mexican grocery store had to extend polling hours to accommodate the massive crowds.