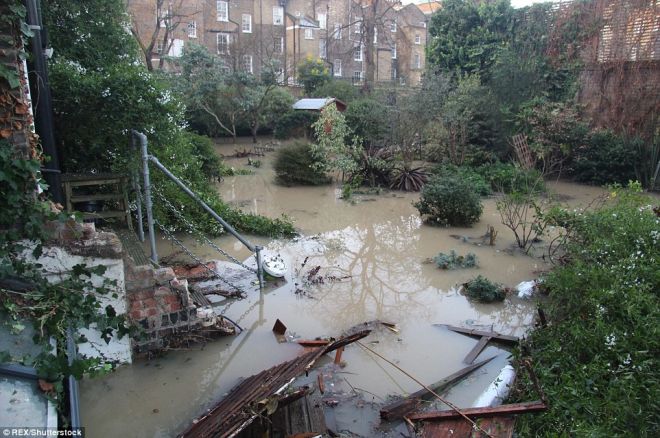 Dozens of wealthy residents are today sifting through what remains of their flood-wrecked possessions after a burst water main left a trail of destruction in its wake on streets close to Boris Johnson's north London home.

Around 100 people were evacuated from their homes early this morning after raging flood waters tore through 'pride and joy' gardens and townhouse basements in an upmarket area of multi-million pound properties.

One elderly couple now fear they will be homeless for Christmas, while homeowner and businessman Stuart Rock described the aftermath as 'like a scene from a disaster movie'.

Another tearful woman had to be consoled by passers-by as she broke down on the steps of one of the flood-hit homes. Families say the cost of repairing the damage will likely run into the tens of thousands of pounds.

Meanwhile, a torrent of water was seen rushing towards Mr Johnson's four-storey, £2.3million townhouse, but it is unclear if the foreign secretary was home at the time.

The water is at a depth of two metres in the basements of properties on Charlton Place in Islington, and about 100 people have been evacuated, London Fire Brigade (LFB) said.

Pictures posted on social media show water gushing through the streets and up through the road.

Police are using The Steam Passage tavern as a refuge for residents, while Upper Street is currently closed with motorists advised to avoid the area.