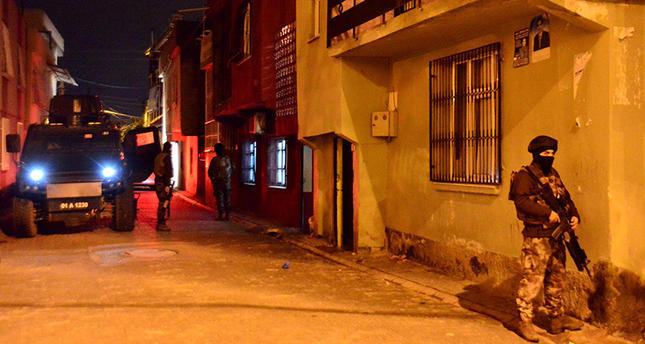 Turkish police detained 30 suspected ISIS terrorists in the southern province of Adana, as clashes between Turkish soldiers and the terrorist group intensified in northern Syria.

In an operation backed by helicopters, counter-terror squad police carried out simultaneous raids on 40 addresses in the area, using battering rams to break open doors, the agency said.

It said the suspects were taken to Adana police headquarters after routine health checks.

As part of Turkey's new approach to its anti-terror, Ankara has vowed to fight terror groups at their roots, before they are able to carry out attacks within Turkey's borders.

As such, Turkey argues that Daesh, as well as PKK terror threats, must be eliminated from Syria and Iraq before they are able to move into Turkey.

Turkey launched Operation Euphrates Shield on Aug. 24, with the aim to eliminate terror threats to Turkey's southern borders posed by Daesh and other terrorist organization.

131 of 365 Daesh suspects are being held in custody to face trial, according to the interior ministry statement.