Norway in court for violation of Breivik's rights 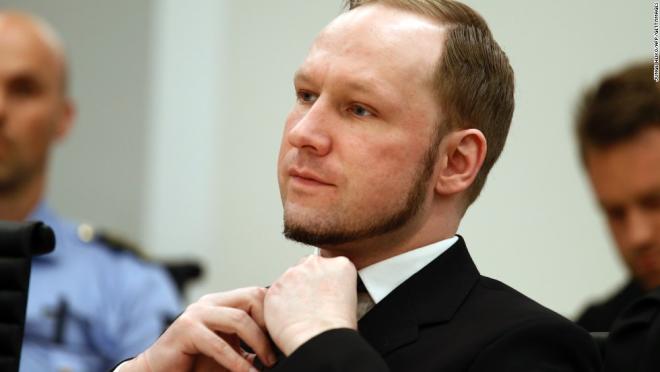 Norway will appeal today against a court ruling that it violated the human rights of mass killer Anders Behring Breivik by keeping him too isolated in jail after he massacred 77 people in 2011.

Lawyers for the state will argue at the Jan. 10-18 appeal that draconian measures, including hundreds of strip searches and no contact with other inmates, have been fully justified for an unrepentant 37-year-old far-right extremist.

On July 22, 2011, Breivik killed eight people with a home-made bomb outside the prime minister's office in Oslo and then gunned down 69 others on an island near the capital, many of them teenagers attending a youth camp of Norway's then-ruling Labour Party.

Last April, Oslo district court shocked survivors and relatives of the dead by finding that the state had violated a ban on "inhuman and degrading treatment" under the European Convention on Human Rights.

Judge Helen Andenaes Sekulic ruled that Breivik was wrongly kept in a "locked world" for 22-23 hours a day, even though it comprised the apparent comfort of a three-room cell with a training room, television and newspapers.

The appeal will be heard in a converted gym at Skien jail where Breivik is serving Norway's longest sentence - 21 years with the possibility of an extension. Breivik's only contacts are lawyers and professionals such as guards and health workers.

Breivik spent his last court appearance complaining of microwaved food and cold coffee and began his appearance with a Nazi salute.

"It should be obvious that human rights laws apply to everyone irrespective of how atrocious their crimes," said Yuval Ginbar, a legal adviser at Amnesty International.

International 'Nelson Mandela' guidelines, named after the former South African president who was jailed for 27 years for opposing white rule, demanded that all prisoners have "meaningful human contact" with others, Ginbar said.

In Breivik's case, Norway's attorney-general argues that that is extraordinarily hard. Breivik's mother was the only family member who wanted to visit him, hugging him shortly before she died of cancer in 2013.

In recent months there has been some slight easing of Breivik's detention conditions. His lawyer has been allowed to talk to him from between bars rather than through a glass wall.

Breivik plans to appeal separately after the Oslo court dismissed his complaint that Norway has violated his right to a private life and correspondence under the European Convention on Human Rights.

The state argues that censorship of his letters is necessary to prevent him inciting violence.