100s of Tibetans gather at birthplace of Buddhism 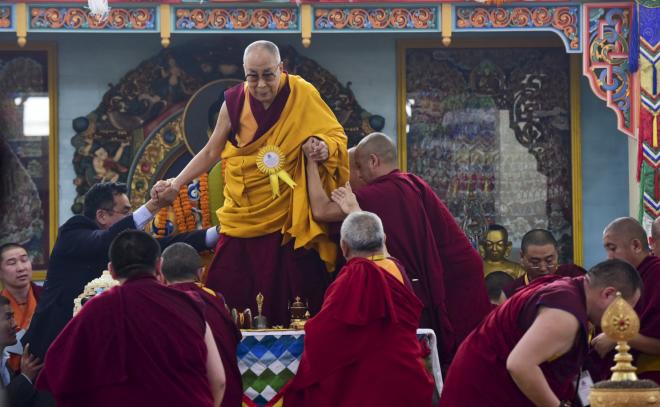 The young Tibetan monk was taking his elderly aunt and uncle on the trip of a lifetime — a tour of holy Buddhist sites in India and a chance to meet the Dalai Lama. But halfway through, word came from China: The family was to return right away.

Axar.az reports that, Chinese police had descended on the monk’s home five times in December, fingerprinting his parents and forcing them to sign documents guaranteeing his return.

But the monk and his family were determined to see the Dalai Lama speak at Bodh Gaya, the Indian city that many consider the birthplace of Buddhism. So they defied Chinese authorities and continued their journey, risking imprisonment, harsh questioning or loss of identity cards on their return home.

“I’m very worried,” the monk said on a chilly evening, sitting in a tent not far from a teaching ground where thousands have gathered daily since Jan. 3 to pray, meditate and hear their religious leader. “If we are put in prison, they will interrogate us: ‘Why did you go to India?’ This can be very dangerous.”

Authorities from the Tibetan government-in-exile say the Chinese government barred an estimated 7,000 Tibetan pilgrims from attending this month’s 10-day gathering in India, an unprecedented move that further erodes the rights of 6 million people who live in the Tibetan region of China. It was also a fresh reminder that the Chinese are threatening to control the selection of the next Dalai Lama after the eventual demise of the renowned religious leader, who is now 81.

“It’s tragic,” said Lobsang ­Sangay, the head of Tibet’s ­government-in-exile, which is based in India. “It’s a once-in-a-lifetime trip for Tibetans, like Muslims going to Mecca. It’s a sad commentary on the Chinese claim to have religious freedom — or any kind of freedom in Tibet.”

The Dalai Lama told reporters that the move was “unfortunate.”

China has denied threatening pilgrims or blocking their departures, but local authorities in ­Tibet declared this ritual gathering, called the Kalachakra, illegal in 2012, the last time it was held in Bodh Gaya. Most of the 7,000 already had traveled legally to India and were forced to return early. Only 300 have remained.

“The government by no means threatened them to return, although the government does not encourage them to attend the ritual,” Xu Zhitao, an official with the Central Committee of China’s Communist Party, told the Global Times, a tabloid associated with the party.