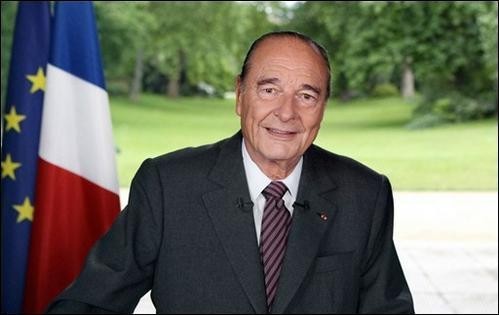 An application file was filed by relatives of the former president so that Jacques Chirac can be distinguished by the Nobel Peace Prize.

A Nobel Peace Prize for Jacques Chirac ? The application has in any case been filed by former Prime Minister Jean-Pierre Raffarin and former Economy Minister Thierry Breton , according to information published by Le Figaro Tuesday, January 24th. A group of supporters to the former President of the Republic argues in effect that the prestigious award is given to those who opposed the war in Iraq in 2003.

Among them, Bernard Accoyer , former president of the National Assembly, François Pinault , General Georgelin, Frederic Salat-Baroux , son of Jacques Chirac and former secretary general of the Elysee, and Jean-Pierre Raffarin and Thierry Breton . To support the application , an association was created, "Jacques Chirac: a commitment to dialogue and peace."

The idea came there a while now, rumors were outlined last October when the association "Chirac" wrote Francois Hollande to plead in favor of the reward for the former head of state . "This international recognition would be amply deserved and legitimate in the light in particular of its refusal to engage France in Iraq in 2003 and the launch of its foundation in 2008 in which it continued to act and make its voice heard for the dialogue of cultures " , had hammered the president of the association, Jean-Baptiste Voisin , in his missive.