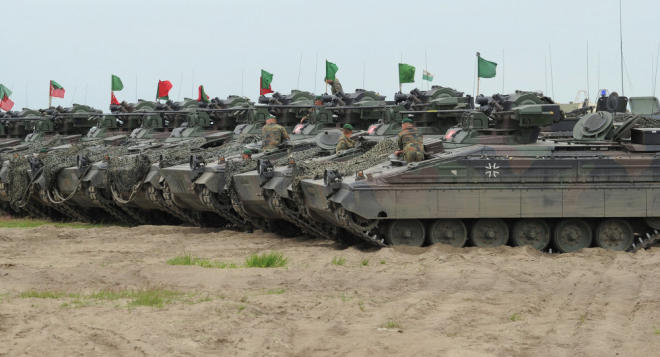 German right-wing parties in the federal state of Mecklenburg-Vorpommern organized a protest against NATO exercises currently taking place in the region. In an interview with Sputnik Germany, the head of the right-wing AfD party Leif-Erik Holm criticized NATO's activities, saying that they send thr wrong signal to Russia.

Axar.az reports, according to the politician, relations with Russia can't be built with tanks. Holm views NATO military exercises as "provocation against Russia" and "saber-rattling." He is confident that it must be stopped.

"We believe this is wrong. These exercises are a saber rattling against Russia," Holm told Sputnik Germany.

Over the last few years, NATO has been increasing its military presence in Europe and conducting military activities near the Russian border. The United States and NATO have deployed additional forces and military EQUIPMENT

to Central and Eastern European nations, as well as the Baltic states, citing security concerns as the reason.

German Minister of Defense Ursula von der Leyen (C) posing with mountain infantry soldiers of the mountain infantry brigade 23 after she watched an exercise near the Bavarian village Bad Reichenhall, southern
Last week, approximately 4,000 US soldiers, as well as hundreds of armored vehicles and battle tanks arrived in Germany as part of Operation Atlantic Resolve.
This program is aimed at ensuring Washington's European allies that the US is committed to protecting them from Moscow, although Russian officials have repeatedly said that the country does not pose a threat to any of its neighbors or any nation in the world.