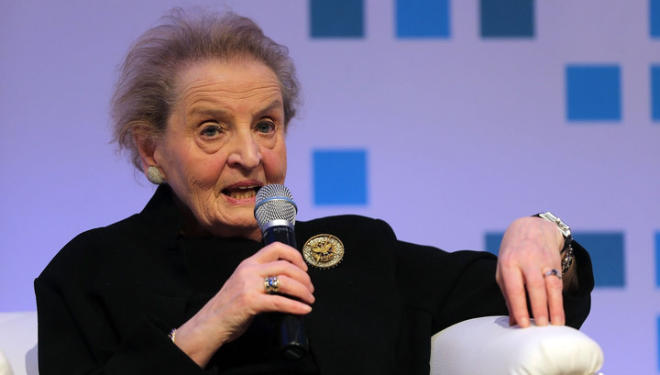 Former Secretary of State Madeleine Albright said Wednesday she is prepared to "register as Muslim" in solidarity amid reports that President Trump plans to take executive action affecting immigrants to the U.S.

"I was raised Catholic, became Episcopalian & found out later my family was Jewish. I stand ready to register as Muslim in #solidarity," Albright tweeted.

Albright's tweet echoes the sentiment of feminist icon Gloria Steinem, who said Saturday she, too, would register as a Muslim if such a registry were required.

"If you force Muslims to register, we will all register as Muslims,” Steinem said during a speech at the Women’s March on Washington, drawing raucous cheers.

Trump during his presidential campaign called for a temporary ban on Muslims coming into the U.S. and said he would "absolutely" require Muslims in the U.S. to register in a database.

Albright's tweets came amid reports this week that Trump was expected to sign executive orders including a temporary ban on most refugees and suspending visas for foreign nationals from seven countries.

The Associated Press reported Wednesday that a draft order shows Trump plans to suspend for 30 days issuing visas to citizens from seven predominantly Muslim countries and stop accepting Syrian refugees into the country.

Those moves come amid a series of executive actions Trump has taken in the first few days of his presidency, including orders Wednesday to build a border wall along the border with Mexico and enforce immigration laws.