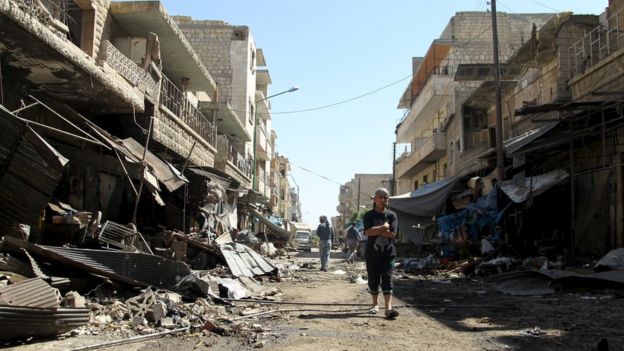 Axar.az reports, the monitoring group's head Rami Abdel Rahman said that regime warplanes carried out air strikes after midnight on several areas in the town of Ariha" in Idlib province.

"The preliminary toll is 11 killed, including at least seven civilians," three of them children, he said.

Others were still missing and rescue teams were searching for anyone trapped under the rubble, Abdel Rahman added.

Leith Fares, a rescue worker in Ariha, told AFP his team had pulled at least 20 wounded people out of the rubble.

"We've been working since 3:00 am (0100 GMT) to rescue victims still under the rubble of two four-storey buildings that totally collapsed on the residents inside," he said.

"We're still looking for two families, estimated at eight to 10 members each, that are still trapped," Fares said.

The deaths come two days after 10 civilians were killed in government air strikes on Ariha, held since spring 2015 by an anti-regime coalition dominated by jihadists.

Idlib province has been battered by heavy air strikes in recent weeks, with intensifying bombing raids by regime warplanes in particular, according to the Observatory.

It has also been rocked by infighting between rebel and jihadist factions, including Al-Qaeda's former Syrian affiliate, Fateh al-Sham Front.