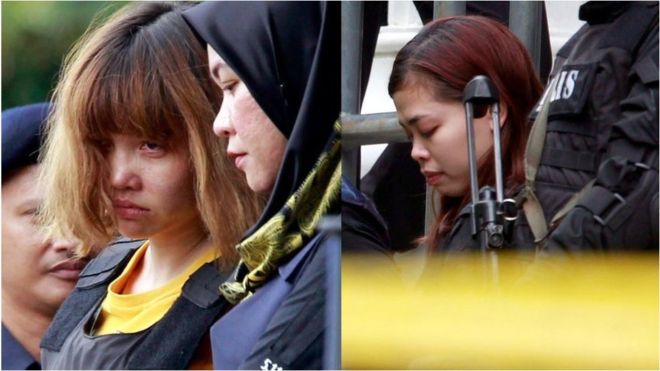 They were charged under Section 302 of the Penal Code, which carries a mandatory death penalty for murder charges.

Sources within the police department told Anadolu Agency, on condition of anonymity as they were not authorized to speak to the media, that both were charged separately, with no plea recorded.

The women had been identified from surveillance footage obtained from the Kuala Lumpur International Airport, where they allegedly assassinated Kim Jong-nam on Feb. 13 using the very powerful VX nerve toxin.

On Wednesday, the charge of Section 302 was read alongside Section 34 of the Penal Code, which states that each accused is fully liable for the entirety of a crime even if she was only involved in a portion of its commission.

Judge Harith Sham Mohamed Yasin set April 13 for another hearing before the case is transferred to the High Court in Shah Alam city.

The public prosecutor applied for both suspects' trial to be held together -- on which the judge reserved his judgment for a later date.

Gooi Soon Seng, Aisyah's lawyer who was appointed by the Indonesian embassy, told reporters outside the courthouse that the defense for both suspects secured a gag order from the judge to curb further revelation of information on the case and related matters to the public.

"The gag order was granted against police and actual witnesses to refrain from making public statements which have a tendency to incriminate her [Aisyah]," he said.

Huong was represented by S. Selvam, who was appointed by her family.

Both women have said they thought they were pulling a prank on Kim Jong-nam while he waited to fly to Macau to meet his family.