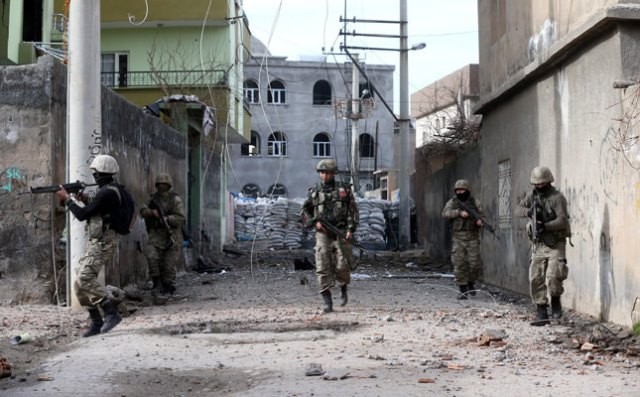 According to the statement released by the Turkish General Staff, 10 PKK members were killed in Mardin's Nusaybin district Sunday, which increased the total number of terrorists killed in the province to 42 since operations began.

In Sirnak, five PKK terrorists were killed Saturday, bringing the total number of terrorists killed in the province to 33 since operations began.

Also, one PKK terrorist was captured in Sirnak's Balveren village, the statement added.

In Hakkari, seven terrorists were killed in Yuksekova district, increasing the total number of terrorists killed in the province to 45 since operations began.

Also, two foreign nationals suspected of being Daesh terrorist group members were captured in Gaziantep, while three other foreigners were held in Hatay provinces while they were trying to cross into Turkey from Syria illegally.

A joint counter-terrorism operation by the Turkish Armed Forces (TSK) and police forces aims to captre PKK terrorists, dispose of planted explosives, fill in ditches, and remove barricades following the declaration of a curfew in Turkey's southeast on March 14.

The PKK – also listed as a terrorist organization by the U.S. and the EU – resumed its 30-year armed campaign against the Turkish state in July 2015.

Since then, around 300 members of the security forces have been martyred, and thousands of PKK terrorists have been killed in operations across Turkey and northern Iraq.