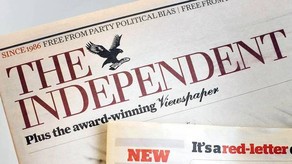 The paper's last front page features an exclusive story about a British connection in a plot to kill a Saudi King and a striking image of train passengers being evacuated during an anti-terrorism operation in Brussels.

Inside the paper, which was founded in 1986 under the slogan "It is. Are you?", four special edition magazines look back at its history.

Journalists for the daily paper posted photos of their final hours working on the print edition and showed editor Amol Rajan giving a speech to a crowded newsroom after it was sent to press for the last time.

Earlier Mr Rajan tweeted a preview of two readers' letters which feature in the last edition.
One, signed by Guy and Caroline Carmichael, from London, told how the pair met and fell in love through the newspaper.