Russia to lift some remaining trade sanctions on Turkey 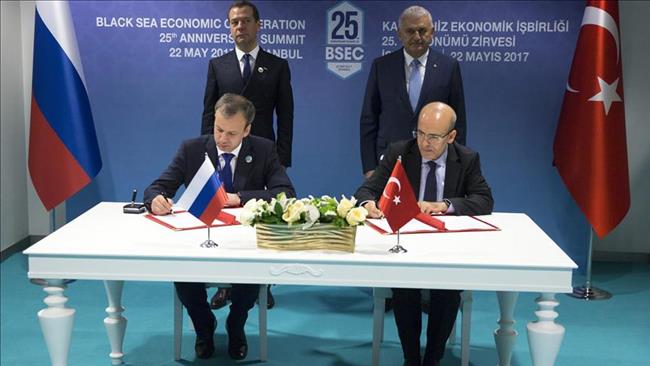 Russia has agreed to lift some remaining trade sanctions imposed on Turkey following the Turkish military's shooting down of a Russian warplane over Turkey-Syria border some two years ago.

According to Turkey's state-run Anadolu news agency, a corresponding agreement was signed by Turkish Deputy Prime Minister Mehmet Simsek and his Russian counterpart Arkady Dvorkovich on the sidelines of the 25th anniversary summit of the Organization of the Black Sea Economic Cooperation (BSEC) in Istanbul on Monday.

The accord is said to be aimed at normalizing and developing Russia and Turkey's economies, and is an attempt to enhance the current trade volume between the two nations. It also called for turning the Black Sea region into a “zone of peace, stability and prosperity."

Meanwhile, the Russian government, in a statement, confirmed that the accord "on lifting of bilateral trade restrictions" had been inked in presence of Russian Prime Minister Dmitry Medvedev and his Turkish counterpart Binali Yildirim.

There was, however, no immediate news on the full details of the agreement. It was expected that the accord end the sanctions imposed on the export of Turkish tomatoes to Russia, a key Turkish agricultural export, but according to Turkish premier, the ban on tomatoes remains.

"We have secured serious developments on all issues outside of tomatoes. We have shared our sensitivities on the tomato issue," Yildirim said.

Relations between Ankara and Moscow nosedived to a crisis point after Turkish fighters shot down a Russian Sukhoi Su-24 fighter jet over Syria in November 24, 2015, when it was on an anti-terror mission in Syrian skies near the Turkish border. Ankara at the time claimed that the aircraft had entered Turkish airspace, an accusation strongly rejected by Moscow.

The Russian fighter jet went down in the mountainous Jabal Turkmen area of the Syrian western province of Latakia. The pilot lost his life in the crash, while Syrian government forces rescued the Russian navigator on board.

In response, Russia suspended all military deals with Turkey and imposed a raft of economic sanctions on the Anatolian country, saying the bans would not be lifted until Moscow received an apology from Ankara. It also ended visa-free travel for Turks as a retaliatory measure.

Russian President Vladimir Putin and his Turkish counterpart Recep Tayyip Erdogan held a telephone conversation in late June last year and agreed to meet in person. The call came after the Kremlin said Putin had received a letter from Erdogan, in which he had apologized to his Russian counterpart over the downing incident.

Furthermore, following the failed coup attempt in Turkey on July 16, 2016, Turkish officials, who had previously defended the downing of the Russian jet, distanced themselves from the incident, saying the bomber aircraft had been targeted by military personnel who later took part in the putsch attempt against Ankara.

On May 3, Putin and Erdogan met in the Russian resort city of Sochi on the Black Sea. At a joint press conference held after the meeting, the Turkish leader said that Ankara and Moscow had agreed to lift nearly all trade restrictions, except those on the exports of Turkish tomatoes to Russia.

Putin, for his part, noted that Russia's relationship with Turkey had fully recovered after the downing "crisis". "Some time ago our bilateral relationship faced some challenges, but now we can state with assurance that recovery process in our relationship has finished. We come back to the normal partnership," the Russian leader said at the time.