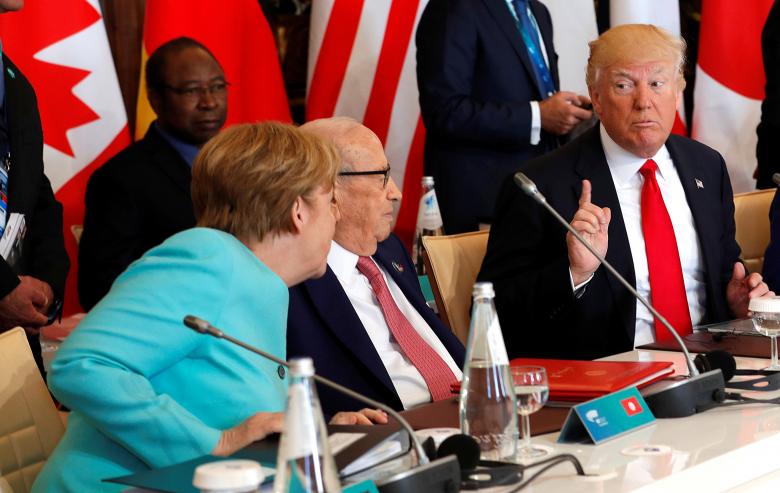 U.S. President Donald Trump called Germany's trade and spending policies "very bad" on Tuesday, intensifying a row between the allies and immediately earning himself the moniker "destroyer of Western values" from a leading German politician.

Trump took to Twitter early in the day in the United States to attack Germany, a day after Chancellor Angela Merkel ramped up her doubts about the reliability of Washington as an ally.

The tit-for-tat row has escalated rapidly after Trump criticized major NATO allies over their military spending and refused to endorse a global climate change accord at back-to-back summits last week.

"We have a MASSIVE trade deficit with Germany, plus they pay FAR LESS than they should on NATO & military. Very bad for U.S. This will change," Trump tweeted on Tuesday.

On Monday, Merkel showed how seriously she is concerned about Washington's dependability under Trump by repeating the message she delivered a day earlier that the times when Europe could fully rely on others were "over to a certain extent".

Those comments, which sent shock waves through Washington, vented Europe's frustration with Trump on climate policy in particular.

Martin Schulz, leader of the center-left Social Democrats, told reporters Trump was "the destroyer of all Western values", adding that the U.S. president was undermining the peaceful cooperation of nations based on mutual respect and tolerance.

"One must stand in the way of such a man with his ideology of rearmament," Schulz added.

Thomas Oppermann, head of the Social Democrats' parliamentary group, told reporters: "Donald Trump makes clear with his tweet that he views Germany as a political opponent."

Merkel on Monday repeated almost word for word her message from Sunday, when she told her Bavarian conservative allies in a packed Munich beer tent that "we Europeans must really take our fate into our own hands".

But she also finessed her message slightly on Monday, stressing that she was a "convinced trans-Atlanticist".

On Tuesday, Merkel repeatedly stressed the importance of trans-Atlantic ties. She talked to Indian Prime Minister Narendra Modi in Berlin about developing cooperation with India.

"That's of huge importance and in no way directed against any other relationships and certainly not against the trans-Atlantic ties, which have historically been very important for us and will remain so in future," she said.

In Rome, Italian Prime Minister Paolo Gentiloni said he agreed with Merkel that Europe needed to forge its own path.

"This takes nothing away from the importance of our trans-Atlantic ties and our alliance with the United States, but the importance we put on these ties cannot mean that we abandon fundamental principles such as our commitment to fight climate change and in favor of open societies and free trade," he said.