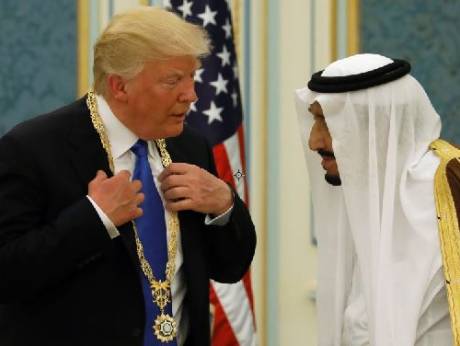 Washington: President Donald Trump stressed the need for Gulf unity in talks with Saudi Arabia’s King Salman Tuesday, amid a crisis that has divided several key US allies in the region.

Axar.az reports citing Gulf News.
The two men spoke by phone at Riyadh’s initiation after Saudi Arabia broke relations and imposed a blockade on its smaller neighbour Qatar over funding for Islamist groups and a host of other conflicts. The UAE, Bahrain and Egypt also ended diplomatic relations.

“The two leaders discussed the critical goals of preventing the financing of terrorist organizations and eliminating the promotion of extremism by any nation in the region,” the White House said in a statement.

“The president underscored that a united Gulf Cooperation Council is critical to defeating terrorism and promoting regional stability.”

Trump earlier appeared to weigh in firmly behind efforts to isolate Qatar, which is home to the largest American airbase in the Middle East.

Kuwait ruler
Earlier, Kuwait's emir left Saudi Arabia after what state news agency KUNA described as a "brotherly visit" but there was no word on the outcome of the talks with King Salman on a major diplomatic rift.

State news agency KUNA said Emir Shaikh Sabah Al Ahmad Al Jaber Al Sabah left Jeddah along with senior officials who accompanied him. It was not immediately clear if he was flying straight home or making any stops on his way back to Kuwait.

The Saudi state news agency had earlier reported that King Salman and Shaikh Sabah had discussed the "development of events in the region," but gave no details.