U.S. troops near besieged Marawi, but not fighting 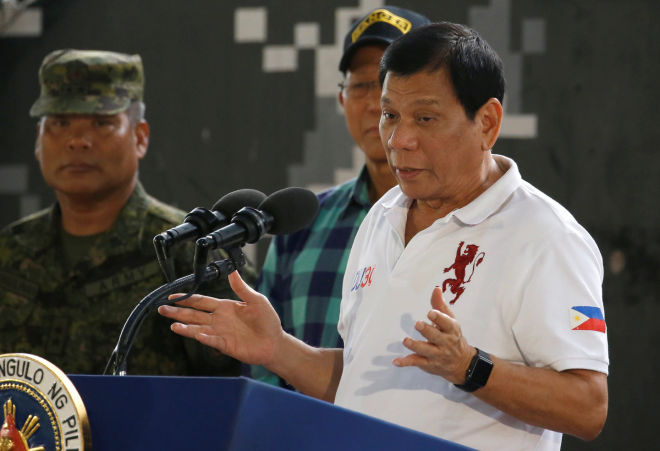 Armed U.S. troops are on the ground near Marawi City in the southern Philippines, but are not involved in fighting Islamist militants who have held parts of the city for more than three weeks, a Philippines military spokesman said.

"There are some U.S. personnel who are operating equipment to provide information on situation awareness to our troops," Brigadier General Restituto Padilla told a news conference.

"I do not know the exact number and the specific mission. They are allowed to carry rifles for self-defense. But they are not allowed to fight, they only provide support," he said.

The Philippines military has previously said the United States was providing technical assistance to end the occupation of parts of Marawi City by fighters allied to the Islamic State group, but it had no boots on the ground.

It was not clear how close to the battle zone the U.S. troops were. They were from a contingent of Special Forces based in the southern city of Zamboanga, the Philippines military has said previously.

The U.S. embassy in Manila did not respond immediately to a request for comment.

A U.S. official in Washington, speaking on condition of anonymity, said the United States was providing a P-3 surveillance plane as well as intelligence gathering from a drone. That drone, however, crashed on Saturday after it lost communication links with its operator, the official said.

On Wednesday, government forces bombarded rebel positions in Marawi with tank fire, and plumes of smoke could be seen rising from the battered city. Some sniper shots could be heard.

It was the 23rd day of fighting in Marawi, and there was no sign that it would end any time soon.

"There will be no more deadlines," said Padilla, referring to a promise by the military to clear the city by June 12, the country's independence day. "It may take some time."

In Washington, a security official who is familiar with the region said the battle in Marawi appeared to be locked in a stalemate.

"At the very least, it is not at all clear that government forces are presently winning or even gaining significant ground," said the official, who spoke on condition of anonymity.

"Islamic State demonstrated significant determination and success in capturing and holding Mosul in Iraq and their effort in Marawi is of a similar notable quality."

The military said 290 people had been killed so far, including 206 militants, 58 soldiers and 26 civilians.

About 100 militants are in the besieged area, the military has said. There are also an estimated 300-600 civilians trapped or being held hostage in the city.

The Philippines has been fighting twin insurgencies from Maoist-led rebels and Muslim separatists in the south for nearly 50 years. Critics say military action is not enough to bring peace to a region that has long suffered from political neglect and poverty.

The seizure of Marawi has alarmed Southeast Asian nations which fear Islamic State - on the back foot in Iraq and Syria - is trying to set up a stronghold on Mindanao that could threaten their region.

"The truth is probably somewhere in between," said the U.S. security official.