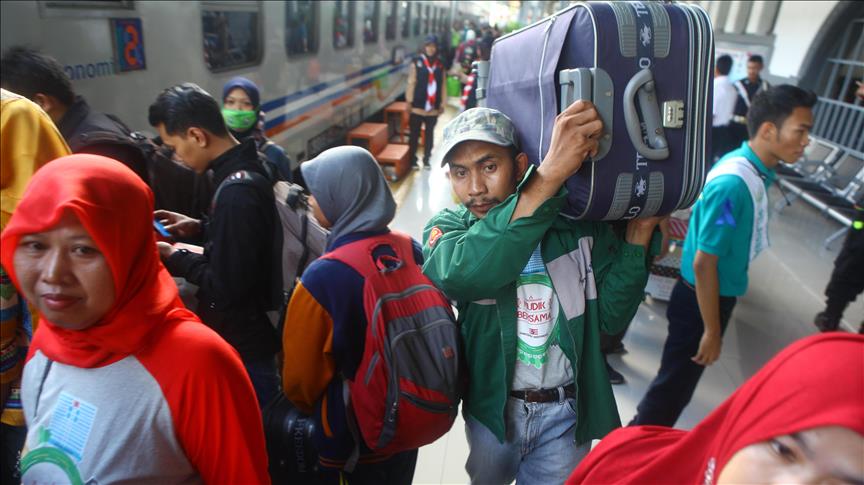 More than 19 million Indonesians are set to travel by road, sea and air over the weekend to celebrate the Eid al-Fitr holiday, expected to fall on Sunday.

The massive surge of travelers, known as Mudik -- or pulang kampung (homecoming) -- has become an Indonesian Muslim tradition.

People embark on grueling, hours-long journeys to be reunited with their families.

A spokesman for the national railway company told Anadolu Agency on Friday the crowds at Senen Station, Jakarta, began a week ago, marking the start of the huge wave of Indonesian Muslims traveling home.

Police spokesman Inspector General Setyo Wasisto said the peak of Mudik is two days before Eid. He warned residents not to start travelling too close to the holiday: "Do not go home too close [to] Eid because it is feared the volume of vehicles on the road will be too big."

Twelve people died last year when they were stuck in a three-day traffic jam at the junction for Brebes, a town on the main island of Java.

Quoted by Kompas.com, Transportation Minister Budi Karya Sumadi said, compared to last year, the number of travelers this year is expected to rise by about five percent, around 19 million people.

He said the government had built new roads and arranged free Mudik travel programs for those with limited resources.

Travelers often bring all family members, including young children, in addition to presents for their relatives in home villages.

Muhamad Hambali, a 35-year-old meat seller, will travel four hours by motorcycle with his wife and son from East Java province to visit his family in Kudus in Central Java.

"We chose motorcycles for going home because it is cheaper and more flexible," Hambali told Anadolu Agency.

Though it must be a tiring journey, he said: "I have not been home for a year. I will not waste this opportunity."

Hilmia Qothrunnada, a 21-year-old university student, took a seven-hour bus from Malang City in East Java to his hometown in Rembang Regency in Central Java.

Although the weather was very hot and he had to jostle with other passengers on the bus, Qothrunnada "this is the price to be paid” to be with his family.

“This is a moment of year not to be missed."

The country’s Religious Ministry will announce the holiday on Saturday depending on the sighting of the moon, in accordance with the Islamic lunar calendar.