U.S. to stage drill with 3 carriers as Trump visits Asia 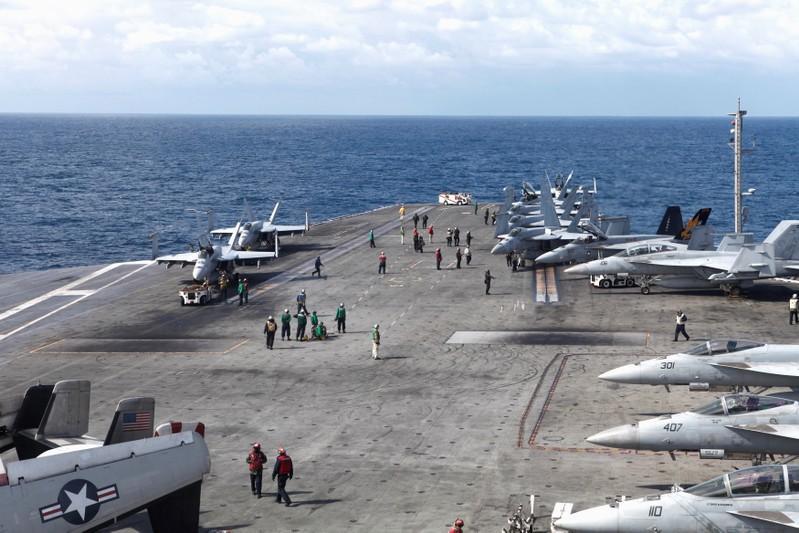 Three U.S. aircraft carrier strike groups will exercise together in the Western Pacific in the coming days in a rare show of force as President Donald Trump visits Asia with warnings about the nuclear threat from North Korea, U.S. officials say.

Axar.az reports citing Reuters that, the drill will include the USS Nimitz, the Ronald Reagan, the Theodore Roosevelt and their accompanying warships, the first time three U.S. aircraft carrier strike groups have exercised together in the region in a decade.

A Japanese destroyer, the Inazuma, will join the armada, two Japanese government officials said, following a separate three-day exercise with the Reagan and two Indian warships in the Sea of Japan that ended Monday.

U.S. officials have previously said the drill was under consideration and that planning was underway. The decision to soon go forward with the exercise in the Western Pacific has not been previously published.

The four U.S. officials and two Japanese sources who discussed the drill with Reuters spoke on condition of anonymity and did not disclose the precise date or location of the exercise. The Pentagon and the Navy’s Pacific Fleet declined to comment on future operations.

Reuters was not aware of any plans for Trump to visit the carriers.

Trump has reiterated his tough rhetoric against North Korea over its nuclear and missile programs since starting a 12-day trip to Asia on Sunday. Speaking in Tokyo on Monday, Trump renewed his warning that the “era of strategic patience” with North Korea was over.

The U.S. leader, who began a visit South Korea on Tuesday, has rattled some allies with his vow to “totally destroy” North Korea if necessary to defend the United States or its allies, and with his dismissal of North Korean leader Kim Jong Un as a “rocket man” on a suicide mission. Kim has called Trump a “mentally deranged U.S. dotard.”

Such large-scale drills serve as a potent reminder of the U.S. ability to rapidly mobilize military force, a capability the Trump administration has been keen to emphasize as Pyongyang races ahead with tests to build a nuclear-tipped missile capable of striking the United States.

Since taking office, Trump has vowed to expand the fleet of U.S. carriers, even as some military strategists and experts believe the massive ships would be increasingly vulnerable to modern Chinese and Russian weapons in any conflict.

Singapore-based military expert Tim Huxley said the presence of the U.S. carriers still sent an unmistakable message, with each one carrying 70-odd aircraft.

“Beyond the capability to project military power at great range, their ability to project political and psychological power is arguably unmatched, and we are seeing that play out,” said Huxley, of the International Institute for Strategic Studies.

“While in a war against China, U.S. carriers might be vulnerable, they wouldn’t be in any conflict against North Korea...and three U.S. carriers can deliver a tremendous amount of airpower.”

Carrier commanders say the strike groups are kept combat ready at all times, with jet fighters and surveillance planes flying constantly from their flight decks to maintain a protective screen.

U.S. defense officials noted recently the presence of the three U.S. carriers in the region was reassuring allies, even though it was long scheduled.

“It does demonstrate a capability that no other nation in the world can do,” Joint Staff Director Lieutenant General Kenneth McKenzie Jr said earlier this month.

Chinese Foreign Ministry spokeswoman Hua Chunying called for restraint during a regular news briefing on Tuesday when asked about the carriers, saying the situation on the Korean peninsula was complex and severe.

“All relevant sides should exercise restraint, avoid irritating each other, dedicate themselves to lowering the tense situation on the peninsula, and at the same time make positive efforts to get the North Korean nuclear issue back on a track to a resolution via talks as soon as possible,” Hua said, reiterating the long-held Chinese position.

The CIA has said North Korea could be only months away from developing the ability to hit the United States with nuclear weapons, a scenario Trump has vowed to prevent.

U.S. Defense Secretary Jim Mattis, on a trip late last month to South Korea, was at pains to stress that diplomacy was America’s preferred course to get North Korea to give up its nuclear weapons.

Still, he warned Pyongyang that its military was no match for the U.S.-South Korean alliance, and that diplomacy was most effective “when backed by credible military force.”