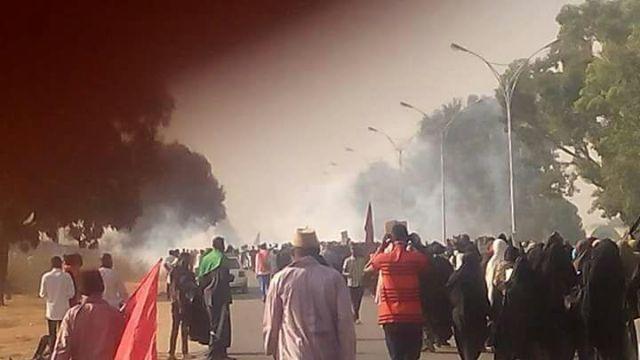 Police in Nigeria have tear-gassed crowds in the capital Abuja to break up a religious procession in the city marking 40 days from the anniversary of the martyrdom of the Prophet Muhammad's grandson Hussain in 680AD, London-based Islamic Human Rights Commission reported on Friday.

Videos and photographs from the scene show pandemonium and panic breaking out among the crowd as they try to escape the noxious fumes. One photograph shows a marcher with his shirt drenched in blood from an apparent wound to the face, said an IHRC press release.

'Today's violence follows an attack on a procession last weekend in the northern city of Kano which resulted in the deaths of at least four innocent people. Just as then, today's attack by police came without warning or provocation.'

The annual Arbaeen processions, which are organised by the Islamic Movement of Nigeria, have come under sustained attack in recent years as the state pursues a policy of persecuting and delegitimising the popular movement, said the rights NGO.

'Led by Sheikh Ibrahim el-Zakzaky, the IMN has been the subject of a government witch-hunt since at least 2014 with its supporters coming under repeated attack. The worst of these was a savage assault on the group in Zaria in December 2015 in which at least 1000 people, including three of Zakzaky's sons, were killed and many properties and religious spaces belonging to the IMN and its followers destroyed.'