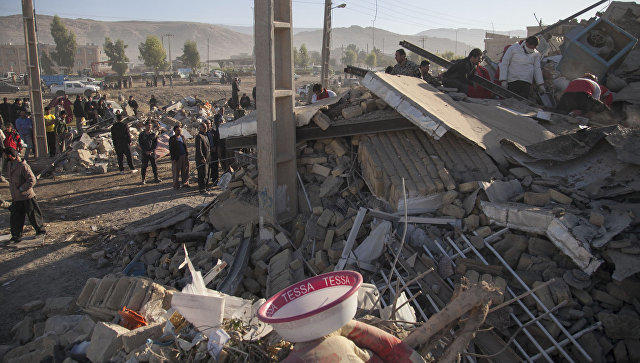 The Iranian Cabinet in a statement on Monday declared Nov 14 (Tuesday) as a day of public mourning for the victims of the Sunday night devastating quake which hit western Iran near its borders with Iraq.

The statement reads that the bitter and sorrowful incident of quake in western Iran which killed hundreds of fellow Iranians and wounded thousands more has grieved the Iranian nation.

Expressing condolences to the Supreme Leader, Iranian nation, especially devoted people of Kermanshah province and all survivors of the tragic event the cabinet wished for swift recovery of the injured and announced Tuesday as a day of public mourning as a sign of respect for all the victims. The Cabinet also sympathizes with the bereaved families as well as those affected in the fatal incident.

The Iranian Cabinet also appreciated all relief workers who are operating in the quake affected areas, calling on all ministries and state institutes to provide services to the quake-hit people.

A 7.3-magnitude earthquake shook the western province of Kermanshah and the regions bordering Iraq on Sunday night.

Based on the latest statistics, at least 430 people have been reported killed and over 7,156 injured in quake-stricken areas in Iran.