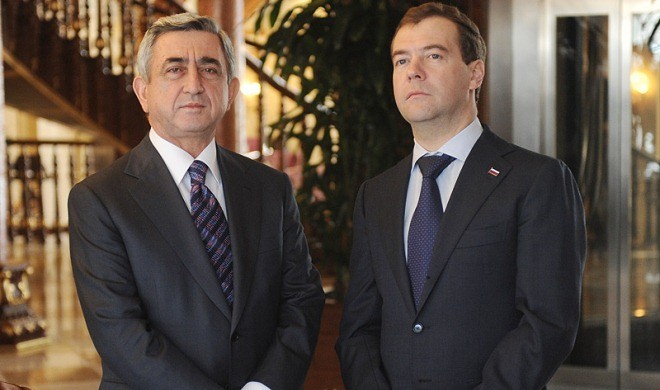 Medvedev said in response there was no alternative to peaceful talks and discussions as instruments of solution of the Nagorno-Karabakh.

"My current visit is linked to it, too, as I'd like to discuss a few things with you in terms of what could be possibly down in very shortly," he said.

"We believe our duty as Armenia's partner is to get first-hand information, to clear out what's happening and to do everything in our power as an ally and participant in the Minsk Group to channel developments in to quiet alley," Medvedev said.

The Russian side proceeds from the assumption the main thing now is to keep up peace, to return to the table of negotiations even though the background for this is far from the best one at the moment, he said.

However, the details of the proposed solution by Russia are not disclosed, politicians suppose that Russia’s proposals may be consist of immediate withdrawal of Armenian troops from the occupied territories of Azerbaijani.