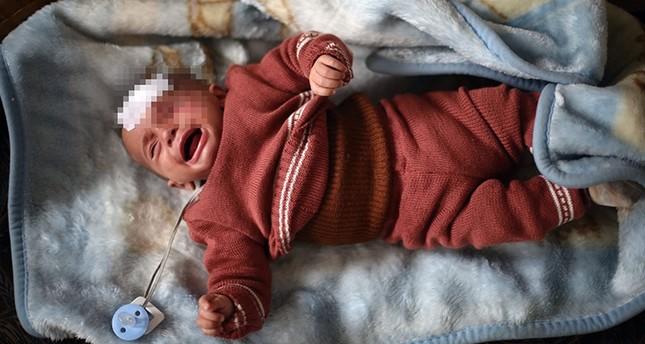 Considered a symbol of resistance to Syria's Assad regime, "Baby Karim" — who already lost one eye to a regime airstrike — may lose his second eye due to a lack of medical treatment.

"Doctors say that if the inflammation in his left eye spreads to his right eye, he may lose that eye too," the baby's father, Abu Mohammed, said.

Two-month-old Karim Abdallah, who lost his mother — and his left eye — to an airstrike last month in Eastern Ghouta, a Damascus suburb, has since become a symbol of resistance against the Assad regime.

Since Karim's story came into a spotlight, many expressed their support for the boy on social media.

Users shared photos of themselves, covering one their eyes with the hashtag #SolidarityWithKarim.

According to the baby's father, the necessary medical supplies cannot be found in Eastern Ghouta, which has remained under a crippling regime siege for the last five years.

"I would like my son to be treated at a proper hospital outside Eastern Ghouta," Abu Mohammed said.

"Local doctors did their best," he added. "But to save his second eye, Karim requires treatment abroad."

He went on to say there were "hundreds" of other babies just like his son who should also be evacuated from the besieged district so they might receive needed medical treatment overseas.

The U.N. says about 400,00 civilians besieged in Eastern Ghouta face "complete catastrophe" because aid deliveries by the Syrian government were blocked and hundreds of people needing urgent medical evacuation were not allowed out.

The International Committee of the Red Cross said in a statement this week that, the humanitarian situation in Eastern Ghouta has reached "a critical point", with limited aid, a frightening food shortage and soaring food prices.