Turkey planning to deploy air and naval forces to Qatar 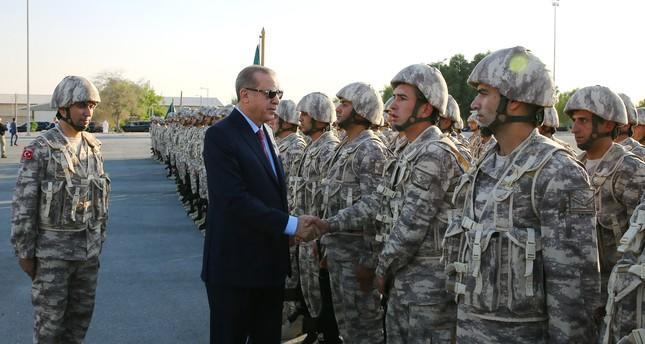 Turkey is planning to deploy air and naval forces to its military base in Qatar in addition to ground troops who were already deployed, the Turkish envoy to Doha said.

Speaking at a press conference in Doha on Turkey's recently launched Operation Olive Branch in Syria's Afrin, Turkish ambassador Fikret Özer said all ground, air and naval forces will be deployed to Doha, without giving a timeline for the deployment.

Ankara and Doha would determine the "timeline of the construction of the necessary infrastructure and when these forces will be deployed through talks," Al Jazeera quoted Özer as saying.

Özer did not disclose the number of Turkish troops currently stationed in Qatar, saying it was up to Doha to share such information since it was the host country.

The already-strong ties between Turkey and Qatar were strengthened after Saudi Arabia, Bahrain, the United Arab Emirates and Egypt cut ties with Qatar in early June, accusing it of backing extremism and fostering ties with their Shiite rival Iran.

Doha, however, denies the claims and Ankara has insisted there is absolutely no evidence to back them.

Amid the riff, Turkey has provided increased support to Qatar, boosting food and other imports to meet the country's shortages.

Turkey operates a military base in Qatar and Turkish troops are deployed to the Tariq bin Ziyad Base under an agreement signed in 2014.

In April 2016, the two countries concluded a military deal for Turkish troops to be deployed to a military base in the Gulf state. The first group arrived in Qatar last June and conducted their first drill at the base.

The base serves as a tool to develop Qatar's defense ability, fight terrorism and support military operations to protect international peace. Turkey and Qatar signed a new military deal in August 2017.

In addition to operating a military base in the country, Turkey also opened its largest defense investment in Qatar last month – a helicopter simulation center that will help the Gulf country train pilots.

At least 1,000 pilots will be trained annually at the center that was built by Turkish defense contractor HAVELSAN at al-Udaid. Turkey has already provided training for 55 Qatari military helicopter pilots in the past.

The project was signed on May 10, 2013, to meet the needs of AW 139 helicopter pilots and operators in the Qatari air force. The project moved to Qatar at the end of 2016. So far, 55 Qatari air force pilots have received extensive training and 40 engineers have served over the past three years in the $39 million project.