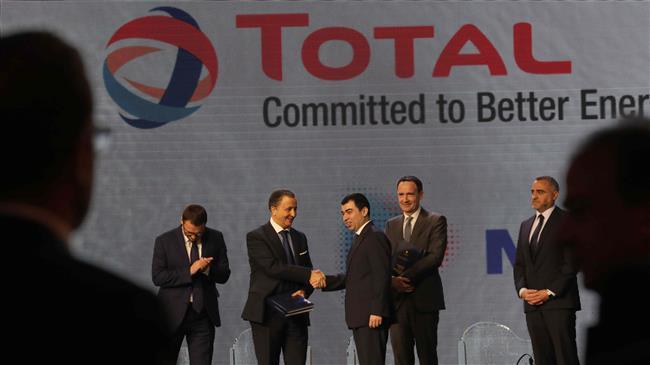 Lebanese Energy Minister Cesar Abi Khalil says there would be a full exploration in an offshore oil and gas field, which lies in Mediterranean waters disputed by the Tel Aviv regime.

“Today, we announce that we have started our petroleum path ... after signing the agreements and launching the exploration activities,” he said at a ceremony in the capital Beirut.

Abi Khalil’s remarks came as the Lebanese government announced on Friday it had signed gas exploration and production contracts for two energy blocks, including the disputed Block 9, with the consortium of France's Total, Italian Eniand Russia's Novatek oil and gas companies.

Last December, the cabinet of Prime Minister Saad Hariri granted licenses to a consortium of the three international companies to carry out exploratory drilling in Lebanon’s Block 4 and Block 9 territorial drinks of water and determine whether they contain oil and gas reserves.

Israeli officials, who claim sovereignty over Block 9, reacted angrily to the announcement.

“When they issue a tender on a gas field, including Block 9, which by any standard is ours ... this is very, very challenging and provocative conduct here,” Israel’s minister of military affairs, Avigdor Lieberman, said at the time.

The Israeli war minister noted that the international firms contracted by Lebanon were making “a grave error” by accepting the offer.

He even adopted a more aggressive line against Lebanon, warning that the Arab country would "pay the full price" should another war erupt between the two sides.

Lebanon's energy minister has stressed that his country was going to push ahead with its exploration plans.

“We consider this [Lieberman’s] statement as an aggression on Lebanon’s sovereignty to practice its natural right to explore our oil resources,” Abi Khalil said, adding that the block was “inside Lebanese territorial waters and Lebanon demarcated maritime borders in accordance with international laws.”

Israel relies heavily on gas. The Tel Aviv regime has long been developing a number of offshore gas deposits in the Mediterranean Sea.

The Tamar gas field, with proven reserves of 200 billion cubic meters, already produces gas, while the larger Leviathan field is expected to go on stream in the coming months.

According to estimates by the Israel Natural Gas Lines, the Israeli-occupied Palestinian territories consumed around 9.5 billion cubic meters (bcm) in 2016. The number is expected to reach 10.1 bcm in 2018.