Armenians to hold aid campaign for militants in Karabakh 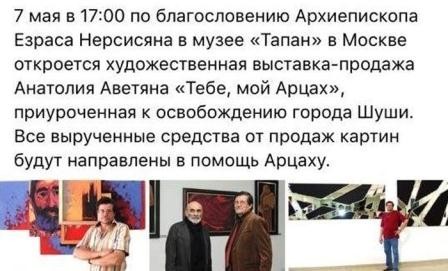 Armenians in Moscow has committed the next provocation relating to the occupied territories of Azerbaijan.

Executive Director of the Moscow sector of the Russian Azerbaijani Congress Shamil Tagiyev told local media that on May 7, in Moscow, on the eve of the anniversary of Shusha's occupation, "My Artsakh" exhibition-planned action will be held in "Tapan" museum with the organization and blessing of the Armenian Archbishop Ezras Nersisyan. The drawings about Shusha which was occupied by Armenians on May 8, will be displayed in the exhibition of artist Anatoly Avetyan’s works, the guests will be informed that Artsakh (Karabakh) allegedly belongs to the Armenians.

Already a massive advertising propaganda in connection with the campaign is being carried out by the Armenians in Moscow. It is reported that money raising from the event will be sent to the Armenian militants in Nagorno-Karabakh.