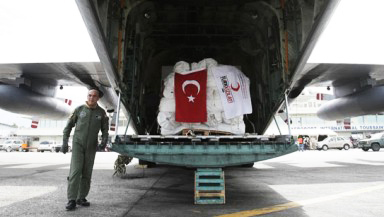 An Istanbul-based aid agency has provided food aid to over 1,000 needy families in northern Yemen.

The Humanitarian Relief Association sent food packages and sacks of flour to families who had taken refuge in Al-Jawf governorate after fleeing from 12 provinces.

Mohammed as-Sudi, head of Al-Barakah, an aid agency in Yemen which delivered the aid on behalf of the Turkish agency, told Anadolu Agency that 1,000 families were given aid packages while sacks of flour were delivered to 400 families.

Sudi also thanked the Turkish people and government as well as the Humanitarian Relief Association for helping the Yemeni people.

Yemen has been wracked by violence since 2014 when the Shia Houthi group overran much of the country. The crisis escalated in 2015 when the Saudi-led coalition launched a devastating air campaign aimed at rolling back Houthi gains.

Saudi Arabia and its Sunni allies accuse the Houthis of acting as a proxy force for Shia Iran.

Tens of thousands of people, including civilians, are believed to have been killed and the UN estimates that around 14 million Yemenis are at risk of famine.