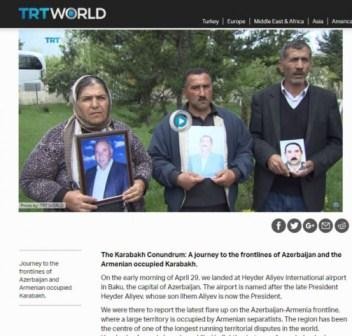 Turkish TRT World television channel has aired a report entitled “The Karabakh Conundrum: A journey to the frontlines of Azerbaijan and the Armenian occupied Karabakh”, focusing on the Armenian vandalism against Azerbaijani civilians.

“Violence along the disputed area were renewed earlier this year and has brought the two countries to the brink of conflict. Armenian rebels have been firing mortar shells into Azerbaijan, killing and injuring many. Azerbaijan has responded with mortar attacks of its own.”

“Some of the injured were being treated at the Barda medical center. Abdullah Ifnizami, a Karabakh resident was comforting his son, who had been severely injured in Armenian shelling. ‘My son was hit by shrapnel in the shoulder and lower abdomen,’ said Ifnizami,” TRT World says.

“After the hospital, we travelled for two hours, inching closer to Aghdam, an area on the frontline, where Armenian mortars had destroyed buildings including a school. Meheremova Aybeniz Familgiz, the school principal, saw the building shaking before she heard the explosion. Fortunately, the classes had ended and the children had left for their homes. Nobody was hurt,” TRT World correspondents say.

‘Four of our classrooms were completely destroyed and the roof caved in’, she said. I asked her if she feared schools in Armenian controlled lands were also hit by Azerbaijani shelling. ‘Never,’ she said, in agitation. ‘Azerbaijan doesn’t shell Armenian civilian areas’.