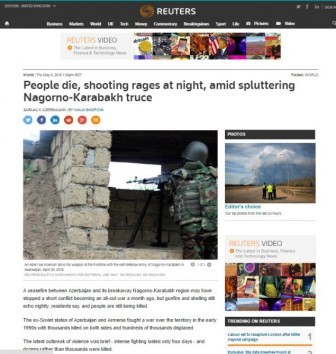 Reuters has published an article about the recent situation in Nagorno-Karabakh.

The article says: “A ceasefire between Azerbaijan and its breakaway Nagorno-Karabakh region may have stopped a short conflict becoming an all-out war a month ago, but gunfire and shelling still echo nightly, residents say, and people are still being killed. The latest outbreak of violence was brief - intense fighting lasted only four days - and dozens rather than thousands were killed.

"We are very afraid as shooting from rocket launchers and shelling has not stopped since the ceasefire," Maral Abdullayeva, an English language teacher in the village of Sarijaly in Azerbaijan, told.

"Our school was destroyed on April 4. It has been partly restored since then, but the kids are still afraid to go out," said Abdullayeva, a slim woman in her mid-40s, pointing to cracks in the walls of her small house.

The situation is a worry for European countries who fear another flare-up could deepen instability in the South Caucasus, a region that serves as a corridor for pipelines taking oil and gas to world markets.

Sarijaly is a small village in Agdam region, about six km (3.73 miles) from the frontline, which divides Azeri forces and Armenian-backed separatists from Nagorno-Karabakh.

"All the electricity lines were damaged. There is no electricity, no gas and we can't even go and work on our land plots".