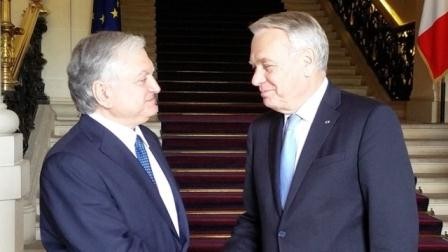 The interlocutors agreed that the use of force in Nagorno Karabakh is unacceptable, and the conflict settlement through negotiations has no alternative. They stressed the importance of agreements on establishing and maintaining 1994-1995 ceasefire regime. In this regard, Ministers highlighted the need to install investigation mechanisms on ceasefire violations and incidents.

Edward Nalabandian also met with French Secretary of State for European Affairs Harlem Désir. Issues related to the stabilization of the situation in Karabakh conflict zone and the steps towards the peaceful settlement of the conflict were discussed during the meeting. In this regard, the sides emphasized that the main objective of the meeting of the Presidents of Armenia and Azerbaijan proposed by the three Co-Chairs is to strengthen 1994 ceasefire agreement.