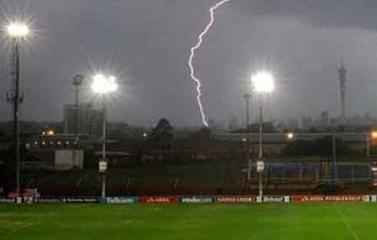 Sometimes athletes need an energy boost to win a competition, but to get one via a sudden and massive jolt of electricity seems to be an extremely bad idea.

Four Jamaican football players were injured by lightning that struck the field during a match. The incident occurred at 84 minutes into the ISSA/Digicel Manning Cup game between Wolmer's Boys School and Jamaica College.

Footage shows a bright flash throw two Jamaica College players onto their knees, while two athletes from the rival squad also collapsed after the strike.

According to Loop Jamaica, a referee called off the game and two players were admitted to hospital. There is no official information describing how severe their injuries are.