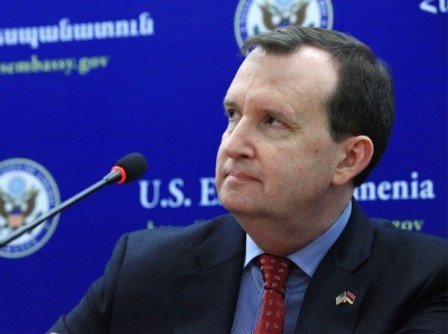 The OSCE Minsk Group co-chairs and the U.S. government are hopeful that the Armenian and Azerbaijani presidents’ possible meeting in June will lead to what everyone is striving for a comprehensive settlement of the Nagorno-Karabakh conflict.

As per the American diplomat, the news from Vienna—where the two presidents met on Monday—was very encouraging.

Mills noted that this was an achievement, since both parties confirmed their willingness to adhere to the 1994-1995 agreement on ceasefire.

In his words, the willingness to work toward creating mechanisms for investigating ceasefire incidents likewise needs to be assessed positively, and this is a demonstration of the good will and readiness by the conflicting parties.

Richard Mills added that the OSCE Minsk Group Co-Chairs stand ready to be consistent and to develop this trend.