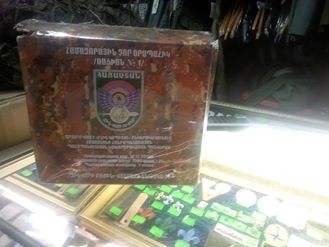 Food and uniforms produced in Armenia for the country’s armed forces are on sale in Poland, lawyer Garik Galikyan wrote on his Facebook page, REPLIK.am news website said.

“One of my friends wrote me something, that I do not know what to say. My 8-year-old son is collecting his pocket-money to buy food and send them to the soldiers. We have people spending their last money on soldiers, but then it turns out that uniforms and canned goods produced in Armenia for the country’s armed forces are being sold in one of the shops in Bielsko Biala, Poland.

Products and military uniforms with Armenian-made inscription on them are being sold for 500 zloty ($160). My friend saw it with his own eyes, even the seller asked him to translate the inscriptions on the products. I ask the relevant bodies to investigate this case,” wrote Galikyan.