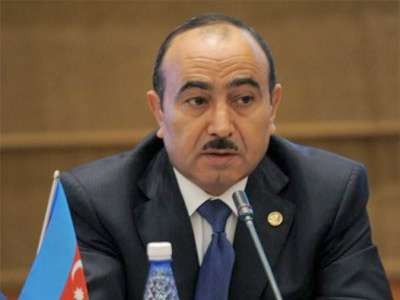 The President's Aide for Public and Political Affairs, Ali Hasanov, said that Baku is ready to contribute to the improvement of relations between Russia and Turkey.

He stressed that the tensions between Moscow and Ankara cannot but worry Azerbaijan, which has high level relations and strategic partnership with each of these countries.

"As the president Ilham Aliyev noted, Azerbaijan is historically linked to the two countries, so it feels sorrow for this tension," Hasanov said in an interview with Sputnik-Azerbaijan.

"The head of state expressed readiness of the Azerbaijani side to make efforts to reduce and eliminate the tension between Turkey and Russia" the President's Aide said.

According to him, Baku is trying to "eliminate the tensions between Russia and Turkey." "Joint activities, focused on the future, not the past, are important both for Azerbaijan and for the whole region," Hasanov stressed.

"Common long history and powerful political connections, especially sincere relations, mutual trust and high-level dialogue between the Azerbaijani President Ilham Aliyev and the Russian President Vladimir Putin are the primary factors which determine the further expansion of mutual cooperation in other spheres,", RIA Novosti cited the President's Aide for Public and Political Affairs as saying.

Russian political experts Sergei Markov said, speaking to Vestnik Kavkaza, that such Baku initiatives, as well as similar statements by the Kazakh government, should be welcomed. "I believe that the Russian and the Turkish authorities should provide opportunities to the leadership of Kazakhstan and Azerbaijan, personally to the presidents Ilham Aliyev and Nursultan Nazarbayev, to play the role of intermediaries. One of the major problems of the Russian-Turkish relations is a lack of confidence, and mediators are needed just when there is no confidence. Azerbaijan and Kazakhstan are Turkic-speaking countries with a huge share of Russian culture, they have good relations with both countries and their mediation efforts could be very positive," the expert expects.

"Both president – Aliyev and Nazarbayev – are strong leaders, who are able to implement this mission.

Ankara and Moscow should take more seriously their initiatives. Of course, Ankara should work on its mistakes in order to send its proposals to resolve the conflict. A compromise must include a recognition that the Russian plane was shot down over the Syrian territory and fell at the Syrian territory. I think we should form a joint commission that would include representatives of Kazakhstan, Azerbaijan, Russia and Turkey.

Following the work of this commission, Erdogan would punish his people in the army," Sergei Markov explained.