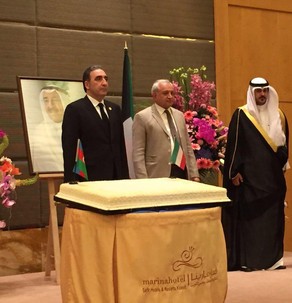 Azerbaijan`s Embassy in Kuwait has organized a reception celebrating the anniversary of the national holiday, Republic Day.

It was told in the Embassy, addressing the event, Ambassador Elkhan Gahraman spoke of the history of the holiday, as well as highlighted the ongoing development in Azerbaijan in political, economic, cultural and tourism fields.

He also provided an insight into the Armenian-Azerbaijani Nagorno-Karabakh conflict.

The reception was attended by high ranking Kuwaiti officials, MPs, public figures, representatives of the diplomatic corps, journalists, as well as Azerbaijanis living in the country.

The Ambassador then was interviewed by local media.