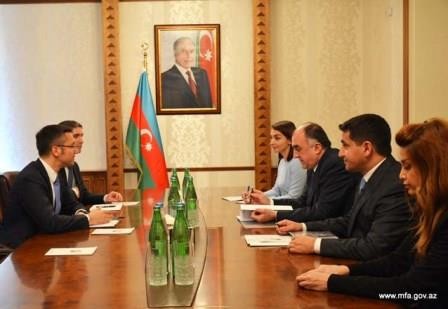 It is necessary to strengthen parliamentary support to the process of peaceful settlement of the Armenia-Azerbaijan Nagorno-Karabakh conflict, said Kristian Vigenin, the OSCE Parliamentary Assembly's special representative on the South Caucasus.

Mammadyarov, in turn, said that for the resolution of the conflict, first of all, the Armenian armed forces must withdraw from the occupied Azerbaijani territories and the aggression must come to an end.

Informing Vigenin about the current situation around the Armenia-Azerbaijan Nagorno-Karabakh conflict and the meeting of the two countries' presidents in Vienna with mediation of the OSCE Minsk Group co-chairs, Mammadyarov stressed the inadmissibility of altering the internationally recognized borders of states by the use of force.