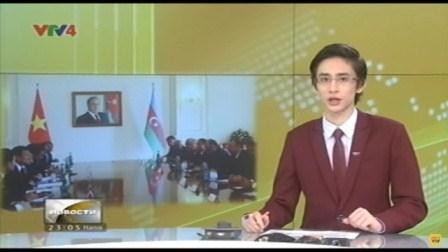 The VTV1 program featured an interview with Azerbaijani Ambassador to Vietnam Anar Imanov, who spoke of statehood traditions of Azerbaijan Democratic Republic (ADR) in 1918-1920, restoration of state independence of the Republic of Azerbaijan – the successor of ADR, the country`s achievements in the spheres of energy, production, IT, education, health and energy, as well as infrastructure projects implemented through the leadership of Azerbaijan.

The Ambassador also provided an insight into the history of Azerbaijan-Vietnam ties, and the present state of the bilateral cooperation. He said reciprocal visits of heads of state gave great impetus to the development of cooperation between the two countries. Imanov also hailed cooperation between Azerbaijani and Vietnamese ruling parties and parliaments, as well as the two countries` collaboration in the humanitarian sphere.

The VTV4 channel aired Ambassador Imanov`s interview in its Vietnamese, English and Russian language news programs. He touched upon the current state and prospects of cooperation between two countries, and pointed to “great” potential for collaboration in the fields of economy, trade, education, tourism and agriculture. He lauded the role of the Azerbaijan-Vietnam Intergovernmental Commission on economic, trade, scientific and technical cooperation in the development of the bilateral relations.