Turks and Azerbaijanis in Germany protested 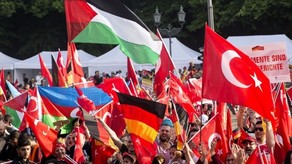 Turkish German organizations took to the streets in Berlin on Wednesday to protest Bundestag‘s vote on a bill which refers to the 1915 incidents in Ottoman Turkey as an “Armenian genocide”.

The Turkish media reports that Turkish, German and Azerbaijani flags were carried at the protest during which thousands of Turks walked from Potsdamer Platz Square to Brandenburger Tor near German parliament.

“We did not commit a genocide, we defended our homeland”, “Federal Parliament is not a court”, “No to Turcophobia” and “Politicians are not judges”, demonstrators chanted calling the controversial resolution an attempt to damage Turkish-German relations.

The bill on so called Armenian genocide is brought to Bundestag agenda Thursday, June 2.

German lawmakers are preparing to pass a resolution Thursday that recognises the massacre of Armenians by Ottoman forces as genocide, despite stark warnings from Turkey that the vote could hurt ties.

Put forward by the ruling left-right coalition and the opposition Greens, the resolution entitled "Remembrance and commemoration of the genocide of Armenians and other Christian minorities in 1915 and 1916" also carries the contentious word throughout the text.