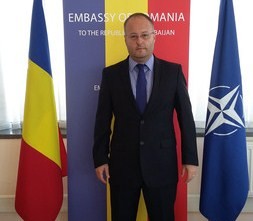 We hope that Azerbaijan once again will be represented at the highest level at the NATO summit in Warsaw on July 8-9.

Said Romanian Ambassador to Azerbaijan Daniel Cristian Ciobanu, who also serves as head of the mandate of NATO Contact Point Embassy in Baku..

The diplomat reminded that President of Azerbaijan Ilham Aliyev participated in the NATO summit in Bucharest in 2008, Lisbon in 2010, Chicago in 2012 and in Wales in 2014: "Azerbaijan is a very important and valued by our NATO partner."

The Ambassador of Romania recalled that the Declaration of the Heads of State and Government noted at the NATO meeting in Wales that the existence of protracted conflicts remains a cause for concern:

"Romania and its allies in NATO are committed to supporting territorial integrity, independence and sovereignty of Azerbaijan, Georgia and Moldova."

He also noted that NATO Secretary General Jens Stoltenberg has repeatedly stressed that NATO supports OSCE Minsk Group efforts to resolve the Nagorno-Karabakh conflict and that a military solution to the conflict does not exist. "The parties must return to the negotiating table and find a comprehensive solution. The peaceful settlement of conflict - one of the main duties of NATO partner countries when joining the program "Partnership for Peace", said Ciobanu.