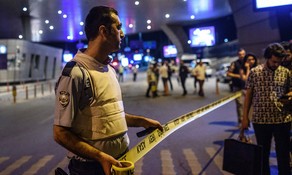 11 suspects of a triple terrorist attack to the İstanbul Atatürk Airport, were detained.

A citizen of the Russian Federation was among the detainees.

All of them have been recruited by the Islamic State. The operation was held in Istanbul Başaksehir.

As a result, three explosions totally killed 43 people and injured 237.