Truck crashes at tunnel in Turkey 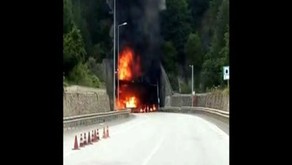 At least five people were killed as a truck hit the entrance of a tunnel in the northern Turkish province of Bolu.

According to the Turkish media, the incident occurred at the entrance of Dorukan Tunnel, at the exit to Mengen town.

A truck loaded with paint thinner was reported to have crashed into the wall of the tunnel.

The crash triggered a fire when the thinner inside the truck ignited.

Five people were killed, according to initial reports.The cause of the incident remained unknown.

An investigation was opened into the incident.