Russian pilots in Armenia starts to prepare for exercises 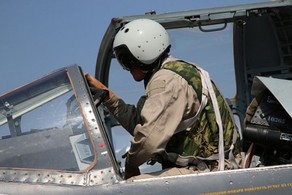 Russian fighter pilots and army aviation of the Russian Erebuni military air base of the Southern Military District, located in Armenia, began preparations for a large-scale tactical exercises, which will be held in mid-July in the high ranges "Kamhud" and "Alagyaz".

The tactical exercises will involve all flight crews, flight specialists and experts and terrestrial services engineers and technical staff of the Russian aviation units in the South Caucasus.