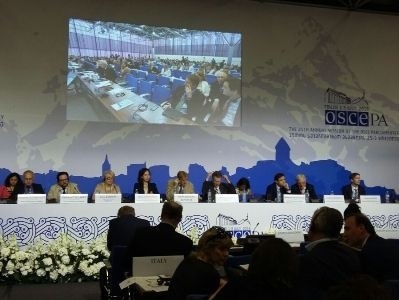 Armenia media considers the paragraph #9 of the Declaration is unacceptable for the country.

The paragraph 9 of chapter I of the Declaration titled “25 years of parliamentary co-operation: building trust through dialogue” stresses the continuing need for enhanced efforts to settle protracted conflicts in the OSCE area in a peaceful and negotiated manner, refraining from the threat or use of force, in full respect of the territorial integrity and sovereignty of the states involved, and in full compliance with the United Nations Charter and the Helsinki Final Act.

The above-mentioned paragraph was added to the Declaration in the form of an amendment, made by the Azerbaijani delegation to the OSCE PA. The amendment was supported by the rapporteur for the OSCE PA General Committee on Political Affairs and Security Margareta Cederfelt.