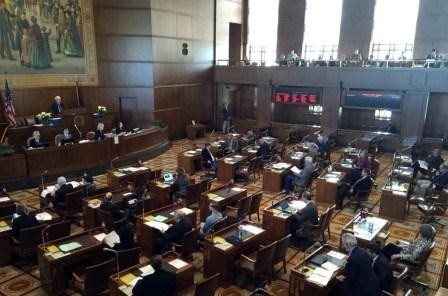 The members of the Legislature of the U.S. State of Oregon have issued a proclamation commending the "long-standing traditions of interfaith tolerance, inclusion and harmony in Azerbaijan," and applauding the efforts by Azerbaijan's Government to foster these traditions.

Signed by the Oregon Senate President Peter Courtney and House Speaker Tina Kotek, as well as by majority leaders of both chambers and many other legislators, the proclamation was presented to the Consul General of Azerbaijan in Los Angeles Nasimi Aghayev, who was introduced on the Senate and House floor while visiting Oregon.

The proclamation commends Azerbaijan's exemplary model of interreligious tolerance and harmony. Stressing the important role of Azerbaijan's Government, the proclamation notes: "since independence in 1991, Azerbaijan has created an environment that nurtures and promotes the ancient traditions of religious tolerance, and rejects radicalism, extremism and hatred, as Azerbaijan sees diversity as one of the country's great strengths and virtues, and has worked to ensure that this diversity continues to blossom… The three major religions have prospered because of the age-old respect and tolerance of the Azerbaijani people, but also because of an important role the Government of the Republic of Azerbaijan has played in constantly fostering the environment of interfaith tolerance, mutual acceptance and respect in the country".

The proclamation further notes: "Azerbaijan has repeatedly, over the course of the last decade, brought together religious leaders from the region and around the world to promote interfaith dialogue — an example which is sorely needed, and in April 2016, Azerbaijan will host the United Nations Alliance of Civilizations Forum… The year 2016 has been proclaimed a Year of Multiculturalism in Azerbaijan."

The document ends by stressing that "it is important for the United States of America to support its tolerant and secular allies and consider the Azerbaijani model of interfaith acceptance and community engagement as a functioning example, and encourage this policy around the globe".