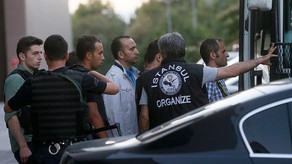 In the framework of the investigation launched in Turkey after a a failed attempt of the military coup in order to overthrow the power committed by the Gülenist Terror Organization (FETÖ),788 suspects were sentenced to imprisonment.

According to the Anadolu, this decision was issued by the Palace of Justice in Istanbul.

12 generals, 1 admiral, police officers, teachers and soldiers are among them.

In addition, trials of more than 1,522 suspects accused of the attempted military coup are expected to bring to the court.