U.S. Embassy urges its citizens to be cautious 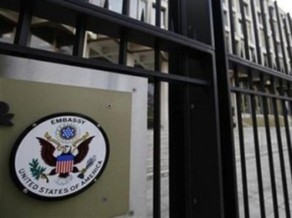 The U.S. Embassy in Yerevan has informed U.S. citizens that various social media outlets are calling for daily protests for the foreseeable future in Yerevan at or around Freedom Square and in the Erebuni District beginning in the evenings.

According to the Embassy's website, the warning declares that 'these protests are in response to the armed attack on the Armenian Police Yerevan City Patrol Regiment Building and subsequent release of hostages. Armenian security personnel continue to be in a standoff with armed individuals in Erebuni District, Yerevan.'

Expect a heavy police presence throughout the country in response to any protests. Roads and any surrounding areas will likely be congested. Recent protests have seen more than 3,000 people.'

'Even demonstrations intended to be peaceful can turn confrontational and escalate into violence. It is better to avoid areas of demonstrations, and exercise caution if in the vicinity of any large gatherings, protests, or demonstrations', the US Embassy warns.

Notably, yesterday members of the armed group, who seized the police station in Yerevan, have opened fire on the police, then received a response fire. As a result of a skirmish, two group members and one policeman were injured.