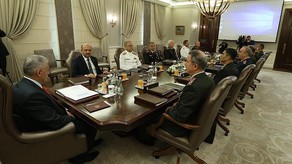 The meeting of Turkey's Supreme Military Council (YAŞ) has ended.

The meeting displayed a number of new civilian features including its location, duration and security measures.

Breaking from the meeting's traditional venue of General Staff headquarters, this year, in the wake of the July 15 failed coup, the council convened for the first time at the prime minister's residence, the Çankaya Palace.

The soldiers who stood in front of the meeting room to provide security were replaced by officers.

Premier Yıldırım and Defense Minister Fikri Işık are also taking part in the council for the first time.

The meeting's duration was also changed from three days to only one day.

Airspace above Çankaya Palace was reportedly closed during the meeting.

The council will review the failed coup-led by a group of rogue officers outside the chain of command, reportedly members of the Gülenist Terror Organization (FETO)-as well as handle its regular agenda, namely the promotions and appointments of military staff.

Yıldırım also announced that the meeting would last for just one day, unlike the three-day meetings of years past.

The council's decisions will be submitted to President Recep Tayyip Erdoğan for approval.