Erdogan visits Russia for the first time after aircraft crisis 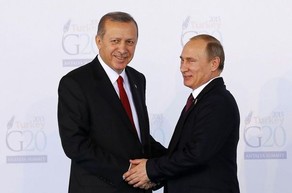 According to the Russian media, during the visit, Turkish President will have a face-to-face meeting with his Russian counterpart Vladimir Putin.

R.T.Erdoğan is also being accompanied by Ministers of Foreign Affairs, Economy, Transport, Defense And Agriculture.

Notably, Russian Su-24 jet was shot by the Turkish Armed Forces on November 24, 2015 for violating Turkish airspace. Relations between the two countries deteriorated after the incident. The two leaders will meet for the first time after the case.