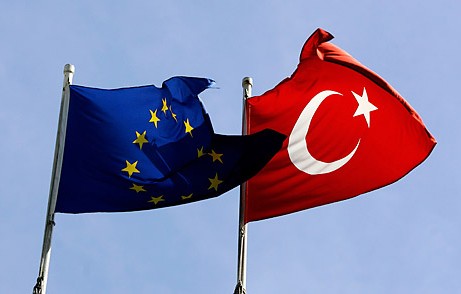 The European Union and Turkey have agreed on the abolition of a visa regime, the Turkish newspaper Haberturk reported on September 5.

The agreement has been recently reached with the framework of the EU foreign ministers’ meeting, according to the newspaper.

The visa-free regime between the EU and Turkey will enter into force in early or late October this year.

Earlier, Turkish Foreign Minister Mevlut Cavusoglu said that Turkey expects the abolition of visas for citizens from the EU until October 2016.

The minister said that Turkey expects that the EU to keep its promise regarding the abolishing visas for Turkish citizens and providing financial aid for Syrian refugees, adding that Turkey will not be able to stop the flow of refugees to Europe alone, if the EU fails to fulfill its obligations

The Heads of State and the EU Member States' governments agreed with Turkey upon a joint plan to combat the migration crisis in mid-March. The program is focusing on the return of illegal immigrants arriving from Greece to the territory of Turkey and accepting legal Syrian refugees in Turkey by the EU based principle of "one for one".

The European Commission has proposed in May that the European Parliament and EU Council will lift visa restrictions for citizens of Turkey, if Ankara will fulfill the remaining conditions for the abolition of visas until the end of June.

The list of pre-conditions included the measures to prevent corruption, negotiations on an operational agreement with Europol (the EU police office), providing judicial co-operation with all EU member states, as well as the revision of the legislation on the fight against terrorism.

On May 4, European Commission proposed the EU to cancel visa regime with Turkey.

In turn, Ankara abolished visas for citizens of all 28 EU countries. However, visa-free regime will come into force only after the EU abolishes visa regime for Turkish citizens.

In accordance with the agreement reached between Turkey and the EU, the citizens of Cyprus will also be able to take advantage of visa-free regime with Turkey.